Skip to content
September 28, 2022
By DAPO OLAWUNI
The Coordinator Joint Border Drill Operations, code named “Swift Response” Sector 3, Ilorin, Kwara State; Compt. Mohammed Uba Garba has revealed new tactics developed by die-hard smugglers in order to beat officers of Nigeria Customs Service.
He said the smugglers are now using Motorbike tanks as well as Camels to smuggler items across borders, despite the partial closure since last year.
This was contained in a statement sent to our correspondent by the spokesman for Kwara Command of Customs, Mr. Chado Zakari on Tuesday.
Compt. Mohammed Uba Garba stated this when he met with stakeholders and traditional rulers of border communities along Kaiama-Jebba-Mokwa-Wawa-Babanna-Kotangora axis of Kwara and Niger States respectively as part of his sensitization program. 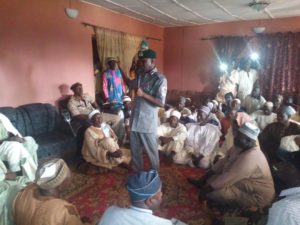 At the Palace of the District Head, Babanna, the Coordinator decried the attitude of die-hard smugglers who are still operating in that axis despite the border closure.
He revealed that perpetrators and economic saboteurs have device new means of using bush-paths, Motorbikes and Camels to carry out their nefarious activities.
He frowned at such stance and reiterated that there is no retreat on the fight against smuggling in whatever disguise. He appealed to the community, District Head and the general public to embrace legitimate means of livelihood and to avoid smuggling in all its ramifications.
He declared that the Sector 3 eagle eye is all around these axis and other axis, as we are battle ready to halt all the new techniques initiated by economic saboteurs to perpetuate their illicit acts.
The coordinator announced that the movement of all types of vehicles/Boat used for transportation of Petroleum Products across the land borders and water ways within 20KM radius has been restricted and anyone caught violating this order will be prosecuted and Jailed.
In his response, the district head of Babanna, Alhaji Isah Yerima confirmed that the security situation in the community has improved since the border closure and pledged to assist security agencies in this National Assignment to succeed.
He promised to enlighten the community and its environs on the benefits of border closure and dangers of smuggling.
The Dodo of Wawa Dr. Mahmud Ahmed Aliyu responded that the aim of Federal
Government to partially close its border is for the well being of Nation’s economy
and that he will support the Federal Government in achieving this goal.
He went further to say that the Emirate council has a long standing cordial relationship with all the security agencies in his domain and promised to do all it takes to assist the Sector in achieving the task at hand.
Compt Garba also visited the Emir Palace Kotangora, Alh. Saidu Namaska who commended the Federal Government for taking the bold step to partially close its borders.
He applauded the coordinator
for choosing traditional institutions as his focal point, who are the grass root
mobilizers, for his sensitization program. He prayed for the peace and progress of
the Country.
The Sector 3, Border Drill Operations covers North Central States-Kwara, Niger, Kogi and Benue State.

LEKKI PORT: MWUN, ITF Spoil for War Over Hints of no Unionization of Workers