In order to quell the alleged barage of attacks and frosty relationship that has existed recently between Nigeria Customs Service and the court suspended National Executive Committee (NECOM) of Association of Nigerian Licensed Customs Agents (ANLCA), the Registered Board of Trustees (BOT) of the association on Thursday visited Comptroller General of Customs, Col Hameed Ali (rtd) at the customs headquarters Abuja to form a new alliance.

The BOT was led on the visit by its Chairman, Alhaji Taiwo Mustapha.


Inside sources at the meeting briefed DAILY TREND NEWS that the BOT was worried about the way ANLCA NECOM have allegedly been attacking the Customs management, and even dragged them to the National Assembly, calling for sack of management.

“The visit is just to restore relationship between customs and ANLCA because of the incessant attacks on them by individuals that are not supposed to parade themselves due to the court order.


“Because of the attacks that the NECOM were giving the customs, we had to go and explain to them that these people have been banned by the court not to parade themselves in office and we wonder why they are still doing that

“Secondly, that we are in court, and the board maturely didn’t want to contravene the law, that is why it is allowing the process. 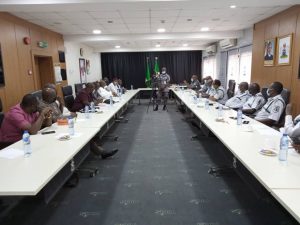 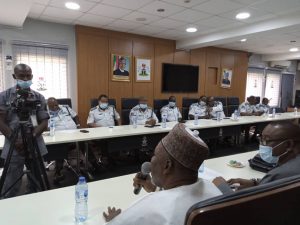 “The customs was supprised that there are matured people in ANLCA after Prince Olayiwola Shittu left, they were still recollecting Prince Shittu days in office, these are officers that were not even in position when Shittu was in power” the source said

Our correspondent however learnt that the CGC, Hameed Ali was on ground to receive the delegation briefly, but was later summoned by Presidency over its recent phase off with the Senate, and he had to leave the meeting hurriedly with DCG Talatu.

Our source stated that major decisions arrived at in the course of the meeting are already being documented.

Buhari Meets Families of Kaduna Train Attack, Says FG Will not Use Lethal Force Against Abductors