At the inauguration of the newly appointed 6th National President and Executives of the National Association of Government Approved Freight Forwarders (NAGAFF) in Lagos on Monday, Founder of the association Dr Boniface Aniebonam has called for the review of Acts establishing Nigerian Ports Authority (NPA) Nigeria Customs Service as well as other government agencies at the port.

In his remarks at the epoch making event, Dr Aniebonam lamented freight forwarders in Nigeria were operating in bandage until the Council for the Regulation of Freight Forwarding in Nigeria (CRFFN) was promulgated in 2007.


He stated that the obsolete laws of the various government agencies is the major reason why Nigerian port system is backwards, compared to other international ports.

The NAGAFF founder, one of the masterminds of the CRFFN Act stated that what was coming to his mind during the establishment of the Council was how to protect NAGAFF members and freight forwarding in particular.

“All NAGAFF members whether you have license or not, you are protected by CRFFN, and more importantly from the obsolete laws that seeks not to put any time for issues of freight forwarding and logistics policies. 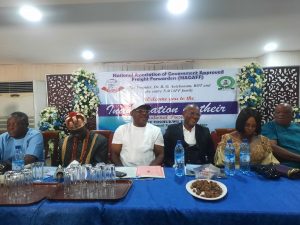 “For instance, if you look at the NPA and the Customs Acts, all of them are 1958 amended as it were, and we are in 2021.
These obsolete laws were made when there was no World Trade Organization and other international organisations, and till now the law is still on, what can it do?

“So, this is the movement that made us to decide that we need to liberate ourselves, Nigeria became independent in 1960.
Only the CRFFN is providing freight forwarders the opportunity to regain their freedom, otherwise, we are under bandage of the laws of 1954 and 1958.

“Most of the agencies in the port, go and look at their Act, and you would begin to appreciate what you people are going through” he stated

On his part, the new National President of NAGAFF, Chief Tochukwu Ezisi declared that his administration will ensure that the association keys into a good health insurance scheme that will be beneficial to all members.

He stated that considering the numerical strength of members of the association, he would negotiate a favourable deal with a health insurance policy provider for good product that would be of benefits to members.

According to him, “We shall also institute a comprehensive health insurance scheme and establish a medical health fund to help deserving members subscribe to the scheme. In addition to the above, my administration will, working with the leadership of the various branches of NAGAFF, establish working relationship with good hospitals across Nigeria to agree discounts on bills for members of our association.”

The new NAGAFF boss disclosed that at the core of his mandate was to run an all-inclusive administration urging members for their total support to enable him deliver on his mandate.

He said, “We need all hands to be on deckas we are going to run an all-inclusive administration. The door is always open for those whohl have ideas on how to move NAGAFF higher. I want everybody to know that NAGAFF belongs to all of us, so we should always think of how to make it better.”

“Consequently, one of the first tasks that my Administration will undertake would be to create an administrative structure that ensures that we are able to deliver on our blueprint for the progress of NAGAFF as an institution. To achieve this, I will require your cooperation and understanding.

“As I have consistently stated, it is out of immense respect, a deep understanding of the value of the mandate thrust upon me and with humility to the will of God that I made myself available to serve our noble association and wholeheartedly accepted the mandate. I thank you once again for the confidence that you have reposed in me and reassure you that I shall do my best to deliver on your mandate”, he said

On his part, Chairman, Board of Trustees (BoT), NAGAFF, Mr. Chidiebere Enelamah in his welcome speech advised the new President to guide against old issues and thought patterns “that will constantly try to reestablish control” in the cause of piloting the affairs of the association.

According to him, “The new issues and patterns should be geared towards acquiring a NAGAFF structure, visitation to all NAGAFF commands, strict adherence to the rules of engagement, constructive engagement of all government agencies, ensuring our members are updated knowledge wise and welfare of members properly looked into. And finally, ensure that all come together.”

Enelamah expressed confidence in Ezisi’s ruggedness and determination to take NAGAFF to the next level, while also assuring that members of the BoT will support his administration.

The associations took turns to pledge their readiness to corporate and partner NAGAFF in ensuring that the industry achieves its mandate and right of place.